Odootec Supports the Second Phase of the Electronic Invoice ​

OdooTec currently supports the linkage and integration phase, which is the second phase of the electronic invoice. This phase will enter into force starting from January 1, 2023, when the Saudi Zakat, Tax and Customs Authority will define the stages to connect electronic invoicing systems and notify the targets in each step. At this phase, the customer's invoicing system will be linked to the (Fateora) platform so that the customer's invoices are sent periodically to the platform for the Authority to verify the validity of the data and its compliance with the specifications and conditions.

Odootec, which is classified as one of Odoo's best partners in the Middle East and North Africa, is one of the first companies that hastened the development of the electronic invoice system to comply with the requirements of the second phase of the authority. The system supports linking supplier invoices to the platform with its two types, according to the nature of the billing as follows:

The System Considers the Following Points:

The POS System by Odootec Complies With the Terms of the Saudi Authority​
OdooTec supports a cloud POS system that allows the issuance of an unlimited number of electronic invoices under the authority's requirements in its first and second phases. The POS (Cashier) system supports the mechanism of linking with any of the external systems via an application programming interface (API). The invoice platform is linked to sending the authority's electronic invoices through this interface. Through this interface, you can also link your OdooTec POS to the accounting system to synchronize the invoices issued by the POS (Cashier) system to your billing system.

Refer to our book on Amazon 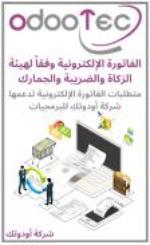